During our recent trip to Tasmania we put a set of Shinko’s 804 and 805 Adventure tire on and F 800 GS we did about two and half thousand kilometers covering pretty much every type of terrain you could imagine. When we first saw the tire it looked really good. Shinko kind of listed as a 60% off road and 40 percent road biased tire and that puts it up against some of the biggest adventure tires in the market. When we’re looking at comparing this to rival tires we’re talking about tires like Michelin’s Anakee Wild, Continentals TKC 80, and plenty of other tires like that. 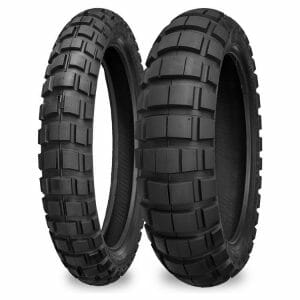 The thing that kind of sets Shinko apart from all its rivals is the price. The price that Shinko can be bought for in the US is massively cheaper than all of its rivals. The Shinko isn’t trying to reinvent anything it hasn’t come out swinging with a completely wild trade pattern or doing something that’s very different to what anybody else is doing. In fact it’s a remarkably similar design to Pirelli Scorpio.

It has that same kind of big flat block with a solid pattern across the middle style and quite small gaps in between the block pattern that makes it a little bit more visually road bias than say a TKC or an Anakee Wild. It feels real soft but it doesn’t have a lot of movement and you would expect that big block pattern with not much gap in between the blocks that have a lot of rigidity and it really does. The tire doesn’t walk, it doesn’t move, it’s very stable and it’s got a really nice profile. The compound feels quite soft to ride as well so you have a really nice feeling of the road.

If we were to choose which adventure tire to have for a large amount of road miles with still some good off-road performance we’d be putting the Shinko in there. It makes up for in the price and the longevity. So we absolutely think it’s an awesome option and you’ll really struggle to beat it.