The Pirelli Angel GT is the successor to the Pirelli Angel ST which was been really popular for the last years. Pirelli classifies it as a sport tire built for extended miles. Looking at the changes brought in this tire, the first thing you’ll notice is the tread pattern has more elongated grooves stemming from the center moving to the side walls on both front and rear. This will give you better wet grip traction, better water evacuation. What Pirelli is particularly put out there is that they modified the compound on the tire. It is more silica charged so it means better wet and dry grip. It is also increasing the lifespan, it’s going to wear better. 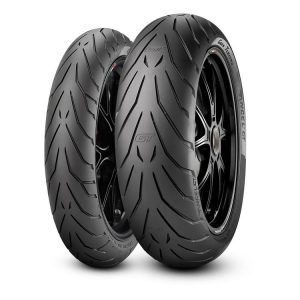 You may have noticed on Angel ST you had a sort of an angel and a demon on the tread pattern. When the tread began to wear you’ll lose that halo and it turned full demon. This tire while it is called the Angel GT is has only a demon tread pattern moving forward.

Another great change is in the rear tire and is regarding dual compound which is huge thing for the rear with single compound in the predecessor. Dual compound means a tougher band alongside the centerline where the power meets the pavement. You are going to get better lifespan out of the tire. One other thing to hold in mind -and Pirelli does in numerous this tires- is the zero degree steel belting. It is longitudinal steel belts that go circularly around the tire. And what that enables you to do it’s a heat dispersion tool.

Whether you’re upright or whether you are on the side wall as the tire starts to get hot, the zero degrees steel belts disperse that heat energy around a much broader distance so they eliminate hot spots, they eliminate wear spots and you are going to get a greater life span out of the tire. So from what we all know of Pirelli being a super premium particularly race influenced race centered organization they do make exceptional incremental features. Jump out now and try on the Angel GT.