The MX 33 are soft intermediate terrain tires coming from Dunlop. These are new for 2018 and they are replacing the MX 3s and the 3s F which without a doubt we’re one of the most popular soft intermediate tires that we had. Dunlop do not get complacent. They’ve continued to improve and develop these tires, they’ve been tested over several years with some of the top pros to get them new and improve. So starting out with the rear, now remember this is a soft intermediate tire and what that means is the type of terrain that you’re going to be riding in. so you wouldn’t want to get these tires if you’re gonna be riding in a really hard pack to say rocky terrain cuz that’s not really what they’re designed for. 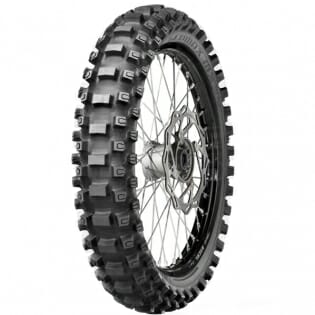 But first thing we’ll mention is that new rubber compound for these tires. so Dunlop noon of the older tire that they wanted to increase the longevity and the durability of the tire so get a new rubber compound now on top of that. If you look at the tread design you can see the center lugs here okay. Center lugs are nice and tall almost like a paddle on these things. So really good drive forward in soft and low mean conditions, that’s a characteristic that riders really like. Also does a great job of self-cleaning so if you’re in that sandy muddy or just soft conditions mud doesn’t pack in there. If you look at its side lugs something very unique that Dunlop started with that MX 3s is you have a block, and a block technology. So you can see you’ve got the side lug but inside there you have another block. And that’s to help increase the surface area of those lugs. Also it just gonna help with your control and also your traction. So when you’re leaning the bike over those side or those block and blocks are going to help increase the traction of the tire. So it’s really cool that they still maintain that with the new MX 33. You’re also going to notice that in between those side lugs they have their tie bar so they’re gonna have this in the rear as well as the front. But what these tie bars are there to do is help with the durability of the tires. So they actually help give more stability at the base of the tread lug. And the purpose behind that is just allowed to not flex as much at the base. And again that’s going to increase durability.

They’ve also got their new apex design so that’s what the rear and the front. So what it does, is actually you have a taller thinner apex inside the sidewall which is designed to really help a shock absorption. They have actually increased the amount of lugs that you do have on the MX 33 from the 3s so that’s going to increase again your contact patch and just help with overall traction so that’s the new rear tire again look similar but a lot of big updates.

Another big feature going to notice is that with the MX 33 they’re now incorporating that block and a block technology that’s carrying over from the rear tire so just like with the rear it’s going to increase the surface area of the lugs it’s also going to help with your linear traction as well as your steering. One feature about this tire that are really light because I’ve actually gone out and ridden on these is I like how much lean angle grip fits his front tire gives. So if you’re on a flat turn maybe you’re coming into a rut you know really leaning the bike over. I really had confidence that this tire was gonna bite and it wasn’t gonna push or feel vague to me so they did a really good job with that block.

They’ve got these new tie bars so now by having those tie bars there along with the new rubber compound that they’re using, Dunlop is saying that they’ve increased the durability and you don’t have to worry about carrying a ripping off knob. So if you’re on a track the soft loamy in the morning maybe it dries out gets really hard pack later in the day you’re not gonna worry about tearing those knobs. One last thing I do want to call out is it is a directional tire so that means when you pick this up it does have a specific direction. You need to mount it on your rim so look at the directional arrow on the sidewall and make sure you’ve meant that correctly. I have mounted front tires in the wrong direction before and it is not fun to take it off and put it back on. So hope you like them how they perform.